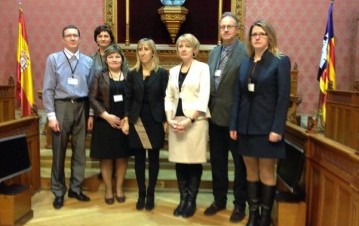 From  the 28th until 29th of November, 2013 in Mallorca, Spain was held the last CHARTS thematic workshop related to cultural routes hosted by Mallorca Council - Environment Department, Spain.

During this thematic workshop, participants exchanged experience about cultural routes in their regions, their preperation work, development and promotion strategies, as well as route influence on intercultural dialoge, creativity, innovations and competitiveness.

Thematic workshop continued with existing cultural routes in Mallorca and day was concluded with official meeting with Ms. Catalina Soler, Councelor of Mallorca's Department of Environment at Council del Mallorca.

"European Cultural Routes" crossing several regions or countries are a good starting point to promote the variety and complexity of European cultural tourism offer.Cultural routes have a strong tourism potential, still mostly unexplored. They are both transnational and representative of European common heritage and values. They are also regarded as being a sustainable, ethical and social model, because they build on local knowledge, skills and heritage assets, they often promote lesser known European destinations. Moreover, 90% of their trails are in rural areas. Active cooperation with the Council of Europe, the European Travel Commission, UN World Tourism Organisation and other international partners is contributing to further develop Pan-European Thematic Tourism Routes.”

CHARTS project is co-financed by the European Regional Development Fund and made possible by the INTERREG IVC programme. This project is funded by the EU’s European Regional Development fund through the INTERREG IVC programme. The publication/website reflects the author's views and the Managing Authority can not be held liable for the information published by the project partners.