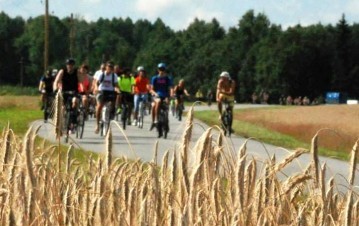 Ever tried cycling on the beach? Not always the most fun, especially on a fully loaded touring bike. But in Latvia a unique stretch of coastline has been prepared for touring cyclists – its naturally hard surface making touring a breeze. The new 160 km route takes in a total of 34 km of beachy trail as it winds along the pristine Baltic coast between Riga and Ainaži.

The Vidzeme Tourism Association have just led a promotional tour on this newly completed section of the Iron Curtain Trail and have published an accompanying promotional video.

Highlights of this cycle tour, for which the Vidzeme Tourism Association recommends two days’ riding on stages of 70 and 90 kilometres, include the capital Rīga as well as many less discoved tourist sites. Near the town of Carnikava you can see a stunning bird life in the Gauja estuary nature reserve, as well as learning about rural traditions in the local history museum. Saulkrasti boasts a 17km stretch of urban beach as well as a charming bicycle museum. Along the way there are many beautiful seaside camping spots on offer, such as the one featured in the video at Tuja.

Before reaching the Estonian border at Ainaži there are many more opportunites to see the wonderful nature that Latvia has to offer as well as many points of interest for those interested in the military history of the region. Former Soviet bases such as Mežgarciems now welcome tourists and offer a unique glimpse into the country’s past.

A complete map of the region’s cycling routes including EuroVelo 13 is available here.