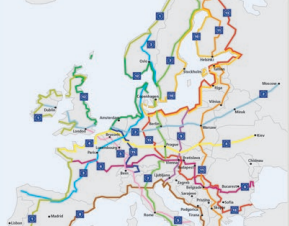 At the end of February 2013, the European Cyclists` Federation (ECF) published a new EuroVelo map providing an overview of the 14 long distance cycle routes that make up the European cycle route network.  The map was launched to a professional audience at the ITB Berlin during the first week of March.

The new map shows the itinerary and the current status of each route (realized, non-realised and planned), the main public transport connections, as well as some of the major tourist attractions to look out for along the way.  On the back of the map is a short introduction to each of the 14 routes designed to inspire potential cycle tourists to head out on their bikes.  There are also links to sources of further information at a national level.

The map serves as a free promotion tool for the new EuroVelo website designed for the public: www.EuroVelo.com

Vidzeme Tourism Association has developed the EuroVelo 13 (The Iron Curtain Trail) route in Latvia with a help of ECOM project. It is planned that the route signposting in Vidzeme (northern Latvia) coastline will be finished this summer, along with bicycle stands and maybe even the first bicycle counters in Latvia!