The launch of Thessalia Charter during Open Days in Brussels 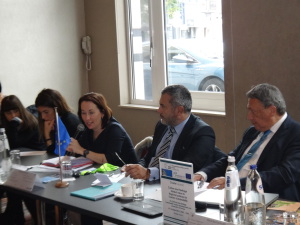 With the participation of representatives from the European Union institutions, pan-European tourism and cultural bodies and other stakeholders, the CHARTS Project Partnership launched the Charter for 'Culture & Heritage Added-value to Regional policies for Tourism Sustainability', in Brussels during 'Open Days - 12th European Week of Regions and Cities'.

This CHARTS Charter had been previously presented and discussed during the CHARTS Project Closing Conference on 12th September 2014, held in Agria, Volos, Magnesia, Thessalia Region, Greece. The 'Thessalia Charter', as it will be known having been firstly presented in the Thessalia region, is adopted in principle by the CHARTS project partners, with further clarifications and appropriate amendments, enhancements and additions.

The Charter launch event was organised by the European Cultural Tourism Network (ECTN), which was established in Brussels in 2009 as an international association following the merger of the two networks set up by ECTN INTERREG IIIC operation led by Wales and CHIRON INTERREG IIIB CADSES led by 'EKPOL – the Social & Cultural Council' of the then Magnesia Prefecture, now of Thessalia Region, Greece.

The ECTN President, Mr Kostas Chalevas, in opening the Charter launch event said:
'Today we launch this important 'Thessalia Charter' here in Brussels for the European Union institutions, pan-European bodies and other stakeholders. There will follow a consultation period till 1st December. We look forward to receiving your comments and suggestions for improvements, towards making this Thessalia Charter the start of a new era in cultural and heritage sustainable tourism development and promotion in Europe and beyond.'

The CHARTS Project Coordinator Mr Manos Vougioukas in presenting the Charter said:
'The purpose of the 'Thessalia Charter' is to bring together in a single, comprehensive and integrated document the main principles, features, findings, conclusions and recommendations on good practices regarding engaging culture and heritage for sustainable tourism development. The Charter aims to build on all relevant previous initiatives, declarations, resolutions, opinions and charters, to exploit synergies and to facilitate implementation of the recommendations by the regional and local destination authorities responsible. It is aimed at regional and local government authorities, destination management agencies, tourism boards, tourism associations, tourism and cultural networks, citizen society and community groups, NGOs, associations of SMEs, European Union institutions, international bodies and other interested bodies and stakeholders.'

The Charter includes the established 12 good practice themes examined and documented in the CHARTS project, but also proposes further actions on the following themes:


A consultation period follows until the end of November 2014, with the final version of the Charter to be published in December 2014, marking a new era in cultural and heritage sustainable tourism development and promotion in the EU and beyond.

This Charter reflects the increasing emphasis given to the issues concerning the preservation and diffusion of the European Culture and Heritage (including contemporary culture and natural heritage), in the light of its connection to Tourism and Sustainability. In this context, the creation of sustainable, innovative and transnational new, enhanced and upgraded tourism products and services based on culture and heritage should be considered of crucial importance. The emphasis of the Charter is on the involvement of the local host communities, the familiarization of visitors with the local culture and heritage, the provision of access for all to the cultural and natural resources, the tackling of climate change impacts from tourism at destinations, as well as overcoming the aftermath of the economic crisis through employment generation, innovation and sustainable development.