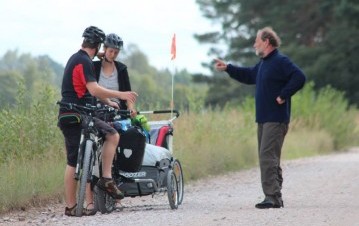 The Silver Cyclists project has officially been launched in September, aiming at increasing the number of seniors undertaking cycling holidays both domestically as well as to other European destinations.

During the project many activities will be carried out such as workshops with stakeholders, photo shooting campaigns of seniors cycling, signature of a charter of Silver Cyclists and the creation of a logo that recognises tourists products as Silver Cyclists friendly.

Last October 5th-6th the project kick off meeting was held in Cologne (Germany). Partners from 7 countries were attending this fruitful meeting setting up the project methodology, management tools, calendar of activities, etc.

This publication is part of the project SILVER CYCLISTS which has received funding from the European Union’s COSME Programme (2014-2020). The content of this publication represents the views of the author only and is his/her sole responsibility; it cannot be considered to reflect the views of the European Commission and/or Executive Agency for Small and Mediom-sized Enterprises or any other body of the European Union. The European Commision and the Agency do not accept any responsibility for use that may be made of the information it contains.