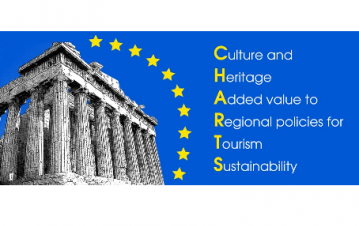 From December 6.-7.th in Burgas, Bulgaria the 3rd CHARTS seminar on Effective Partnerships took place with an exmpahsis on partnership between tourism destinations and culture sectors.

Mr. Janis Sijats from Vidzeme Tourism Association showed the models of partnership that are used in Vidzeme (North Latvia), as well as for cross-border cooperation and international projects, with an empahsis on effective partnerships between tourism destinations and culture sectors.

During the Seminar all partners were introduced with The Union of South-East Region Local Autohrities/USERLA model that consists of four local municipalities: Burgas, Yambol, Stara Zagora and Sliven. Also the model of Pafos Regional Board of Tourism was presented - its structure, methods  and effectiveness. (All presentations from the Seminar can be found below!)

For the first time, a lecturer and researcher from the University of the Aegean was giving a presentation on the role of the regional airports, as a key to regional tourism development and its role in the economy.

After the seminar a  "Partnership Cafe" was organized to give the possibility to exchange good practices and establish business contacts between the local entrepreneurs and Project Partners.

During the two-day seminar, the participants attended the events of the St.Nicolas day (organized every year by Burgas Municipality), the Ethnographic Museum, Arcehological Museum and Nature-preserve "Podas".

CHARTS project is co-financed by the European Regional Development Fund and made possible by the INTERREG IVC programme.

This project is funded by the EU’s European Regional Development fund through the INTERREG IVC programme. The publication/website reflects the author's views and the Managing Authority can not be held liable for the information published by the project partners.